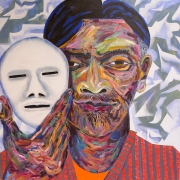 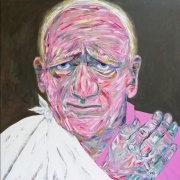 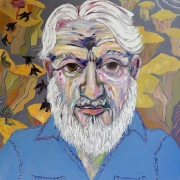 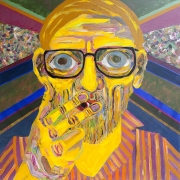 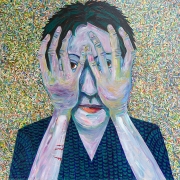 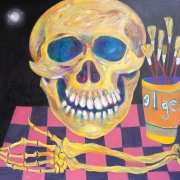 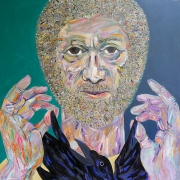 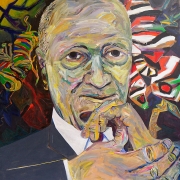 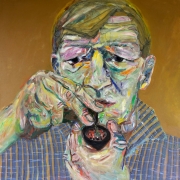 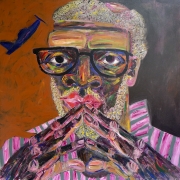 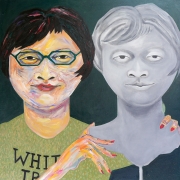 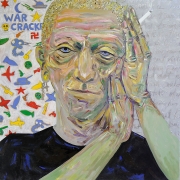 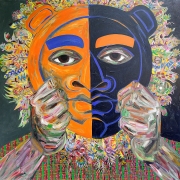 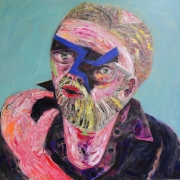 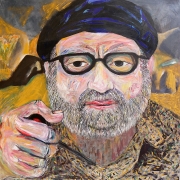 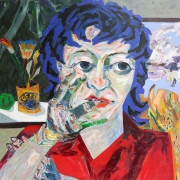 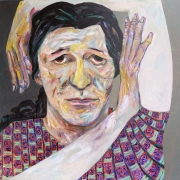 I started the Artist Portrait series because I began missing my artist friends. I went to the funeral of Jack Harman. He was one of the first ones I painted. Jack owned Harman Foundry in Gastown. I used to live upstairs at the foundry. Whenever I needed work, I would go downstairs and talk to Jack and he'd get me in there grinding and working on some of the bronze sculptures for artists. All of Bill Reid's big sculptures were built there. I worked on those for a while.

I never had any photographs of the artist. I didn't have them sit for me. I just painted them as I remembered them. I call these portraits 'authentic memory', because I paint them in a way I remember them, how their hands moved or didn't. Like whenever Jack Harman came to a problem in sculpture, with the mould or whatever he would pull out his pipe and start playing with it, stirring it with a match trying to get it to relight. So I feel I caught him with his hands and his pipe, that to me, was him. I missed Jack Harman on different levels, artistic and emotional. The other friends I started painting them as I remembered them.

Then Jack Shadbolt , who used to come to my studio often and look at my work died. He'd been to my studio maybe 8-9 times. He used to get excited to see a young artist's studio. He would enter my studio excited and we would start talking art instantly. Jack was a very interesting man, because he only wanted to talk about art. There were no side issues. No politics only art. He would start by saying “Look at that painting,” and that was it. He'd get inside my paintings and he'd tell me what he liked, what he didn't like and we'd have this thing. I would try to defend the meaning of the painting. It was always interesting and exciting to really talk to another real artist and I always learnt something from him.

As these older artists began dying I started doing these paintings. I started with the ones who had died and then I continued doing other paintings of artists from my past. Several more have died since I started the series. These paintings are memories of how they looked, how they felt. I can be free with that. You don't have to have an exact realistic look of them. How was their eyelid? How was their nose? But when people see them, they say "Yeah, that's Bodo Pfeifer.

I'm looking for the essence of that person. I wanted the feeling of the person and the feeling of the person is usually what they do with their hands, how they move them or have them in repose. So, every one of the paintings have their hands in some way doing an action that means something to them. Sometimes the background is important because it explains them in some way, and then other times, it's not.